The Scooter Review
If you go to Sym’s website the Mio 100 page begins with the tagline “The ultimate urban scooter”, strange because I thought all scooters were by definition, urban, anyway, after poking some fun at Sym I rode the Mio 100 the next day and you know what, they’re not entirely wrong. Lets say urban to Sym means; no motorway usage and no distances greater than about 15km, then I’d have to agree with Sym. For some people this could be the ultimate urban scooter.

Here’s the rub. The Mio 100 is small, very small. Smaller and lighter than some 50cc scooters actually. It weighs in at around 87kg which makes it very manageable for people of small stature or low body weight. Now this may sound like I’m trying not to be sexist and avoiding simply saying good for girls, well yes that is true. Women love this scooter, it’s great looking and very very easy to maneuver. However, I AM A MAN and, well I like this scooter too. I have no problem with its slightly feminine retro looks: I think it looks damn cool: okay it’s certainly not very gangster but we’re talking scooters here and really, none of them are very gangster.

The 100cc Mio is straight up fun to ride, its light weight means you can aggressively throw it into turns and generally carve up city traffic. The 100cc engine is nice and torquey, pulling away from traffic lights with surprising swiftness. Its 0-50kph time of seven seconds flat is quite brisk for a 100cc machine and quicker than some 125cc. scooters. The engine also makes a rather nice sound for a 100cc, a bit lower and more serious sounding than one would expect from such a small machine. The front disc brake is of about average strength, while lever feedback is good giving you reasonable confidence under brakes. The rear drum brake is like most drum brakes, junk. One day many years from now scooter manufactures will include dual disc brakes on all models, one day.

Orange is okay for such a small size scooter but unfortunately doesn’t take a large full face helmet, close but not quite. The Mio also has some great features for such an affordable scooter: a handle bar mounted seat storage switch so you can easily access your gear without using the key, a kill switch under the seat to help prevent theft and a fuel cap release on the ignition barrel to speed up refills. All together a lot of convenient features and certainly more than most of the competitors offer at this price point. The Mio does have rear pegs for a pillion and will actually move two smaller people along reasonably swiftly. Obviously it’s a little cramped but just fine for short trips around town.

The real party piece however is the cool dash lighting, with each move of the headlight switch you can cycle through green, red and blue lighting, with a cool glow. It serves no real purpose but is a nice little surprise. Retailers tell me it is a great gimmick and helps sell many a scooter. Funny really, us humans are really dumb: a few colored lights and we’re sold. Aliens flying past our little world must look down on us and sigh. Oh well, I’m dumb too, I like the colorful lights.

We ran our usual fuel economy tests which I somehow managed to botch on multiple occasions. Unfortunately we had to return the scooter before I could get the absolute definitive numbers. That being said the Mio 100 returned good fuel economy as you’d expect given its light weight. The results of the first tests returned approximately between (2.9L/100kms – 2.6/100kms), (82MPG – 89MPG ) which is about average to good for a 100cc scooter.

There’s not much I didn’t like about the Mio 100, just a few niggles. The seat is soft and comfortable but raked slightly too far downward causing you to slide forward a tad. This is avoided by sitting further back on the flat section for the pillion passenger, however you do end up in a slightly stretched out position; all most like you’re riding a touring bike. Obviously not perfect when you are carrying a pillion as you end up on the slopey front part of the seat again. The indicator switch is the highly annoying old style three position slider type with no centre push override; these should have been outlawed long ago. Apart from that there really isn’t much wrong with the Mio. It’s quite well put together and SYM have a great reputation amongst Taiwanese manufactures for reliable products. All told I’d be very happy to use this fun little scooter as daily transport even if it does look a little, ah, feminine. So if you’re looking for something more powerful than a 50cc scooter but don’t want anything big or heavy, then you simply must try the SYM Mio 100. It really is a fantastic little scooter at a great price. Try it. 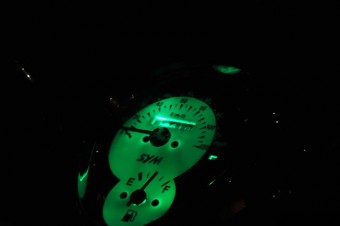 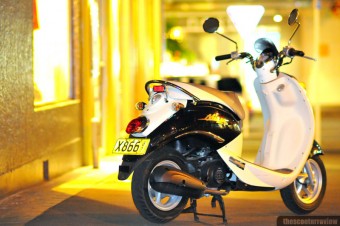