Greg Leech
https://www.bikesales.com.au
Saturday, October 3, 2015
Out of Taiwan comes SYM’s latest maxi scooter offering. How does it stack up?

The bike lands at a challenging time for the scooter sector, with the popularity of scooters in Australia declining. In fact 2015 first half sales are down a significant 25.9 per cent compared to first half 2014 figures.

It continues to baffle us why this should be the case, with scooters making eminent sense when it comes to urban living. Okay, if you are a sheep farmer in Cunnamulla, we get why there is little appeal. But, for useage in and around major cities, there really is no more efficient means of transport. Go to any major Asian or European city to see this borne out.

We reckon this is likely to change, with smart state governments legislating to allow lane-splitting. You’ll be at work early on a scooter, and parking is either free of charge or way cheaper. It should simply be a matter of time before this sinks into the stubborn Australian motorcycle psyche.

So, to the GTS300i. In the scheme of things this is a (smaller) maxi-scooter, with enough poke that allows it outside the bounds of hipster-filled inner urban going. With that in mind, we took the opportunity to spend a week with the bike, to toss some real world running at it. Our test saw freeway running in addition to suburban and indeed some inner city use. In short, just about everything the bike is likely to face when operating in its natural habitat.

Scooters are easy climbed aboard and offer good comfort. The 300i has a stepped seat offering oodles of room, particularly for the passenger, whose vision is aided by the second-tier seat. If you have ever stared at the back of a helmet for days on end, you’ll get why this is a big plus in regard to long-distance ergonomics. We would have liked the step in the seat to be just a touch further back, giving a bit more room to the rider, at the expense of all that space for the passenger. After all, it’s that front seat that is going to get the majority of road time.

Hit the electric start button and it’s immediately obvious that the Sport is quiet and unobtrusive, which is great for wheeling it out from under a stairwell in a block of flats. The neighbours may not share your affection for two-wheeled transport, and its perceived associated noise. Again, scooters make sense.

The bike has angular and futuristic styling which is accentuated by things such as the mirror-incorporated blinkers, and classy four-dial instrument panel. Information offered here includes a clock-type speedo, tacho, temperature and fuel gauges. The centre of the tacho offers a trip computer with a comprehensive array of functions. Neatly packaged and practical.

The GTS300i Sport comes at standard with ABS brakes, hooked up to wave discs. Stopping is via right hand lever operating the front brake and left lever the rear. Braking is quite good, once you get used to where it all is. A nice dynamic is the manner in which the bike can be ‘steadied’ at low speeds at the ’bars. A touch of rear brake, with the slightest of throttle allows easy service station going and low speed maneuvers. All this is aided by a nice low centre of gravity, with the 12lt fuel tank housed in the footwell.

There’s a huge lockable storage area located under the seat, which will allow shopping trips and the like. There’s room for a laptop and a helmet, which means not lugging your lid when off the bike.

A super touch is the leg heater located on the lower headstock. Scooter configuration allows room for the sort of ducting required for this type of thing and it really represents a leap forward. Taswegians, take note.

The bike offers pretty good performance, with my commute seeing 140km/h on the freeway, and there is more than enough instant go, thanks to the CVT (constant variable transmission) auto set-up, to get away at lights. CVT operation is a little different when encountered for the first time, but it really offers many advantages in regard to scooter applications. There are no discernible ‘steps’ in power delivery, revs remain relatively high and this all means there is power on tap regardless of engine or road speed. Very user-friendly, and the 300’s engine is a willing performer.

There’s a sidestand (as well as the more traditional centrestand) on the Sport and this is smart. Scooters, for all their maneuverability when on the move, can be a little unwieldy when being manually pushed around. You get used to it, but pulling one up on a centrestand, particularly on uneven ground, can be a bit of a trap for young players. A simple flick of the sidestand avoids all this.

Other touches see a 12-volt power outlet and USB charging port and stop/start technology fitted. For those that my not like stop/start, and I have to admit to being one of them, this is simply disabled at the touch of a button. It does save fuel though and GTS300i Sport is a pretty frugal thing to start with. SYM claims 2.8l/100km and that’s doable in the right circumstances. Build and finish is tidy and the bike’s appearance belies its pretty competitive price of $7599 plus on-road costs.

Motorcyclists and scooter riders belong to different tribes, and this is especially so in the domestic Australian market. Those lines will blur as the urban sprawl of our cities shows little sign of diminishing, and the pure sense of a scooter takes hold of the commuter marketplace.

The 300i also brings country running into the game, with comfortable power and road manners for long distance use. Even two-up, there is enough go to get you there with a good degree of sporting ability also in the mix. Toss your clothes, toothbrush and credit card into the storage area and head away for the weekend, or jump on and get to and from work with ease.

It’s priced right, fills a spot in the market nicely and does everything it says on the tin. In short, this is practicality central. 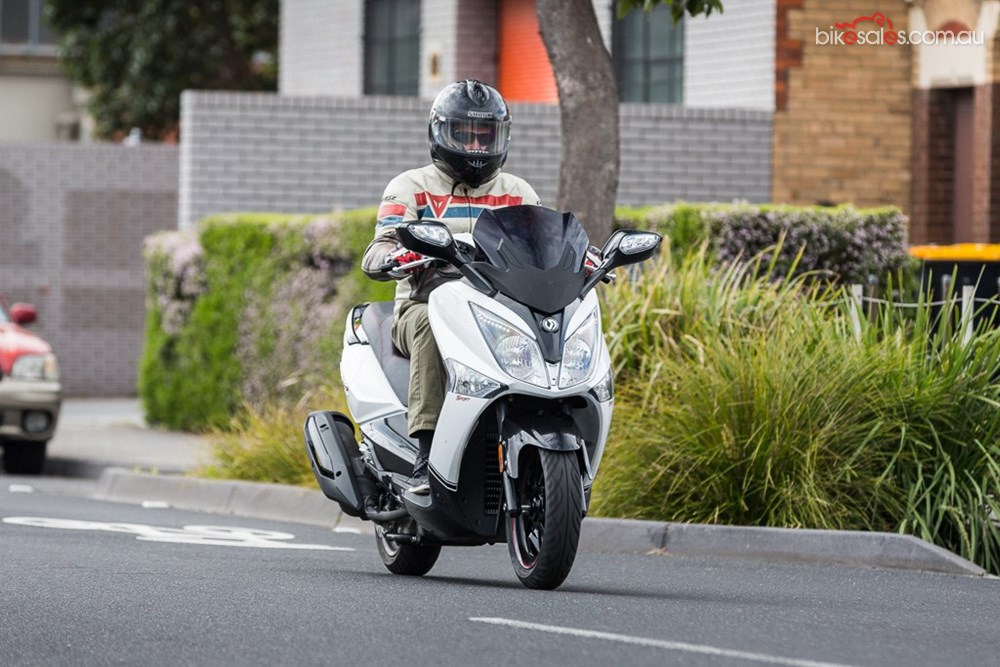 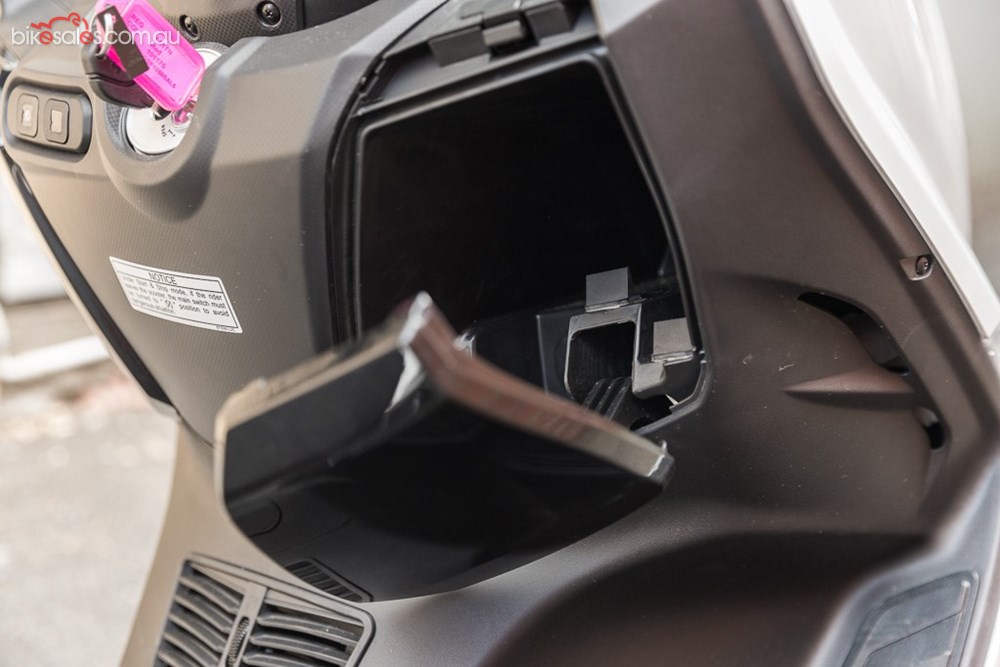 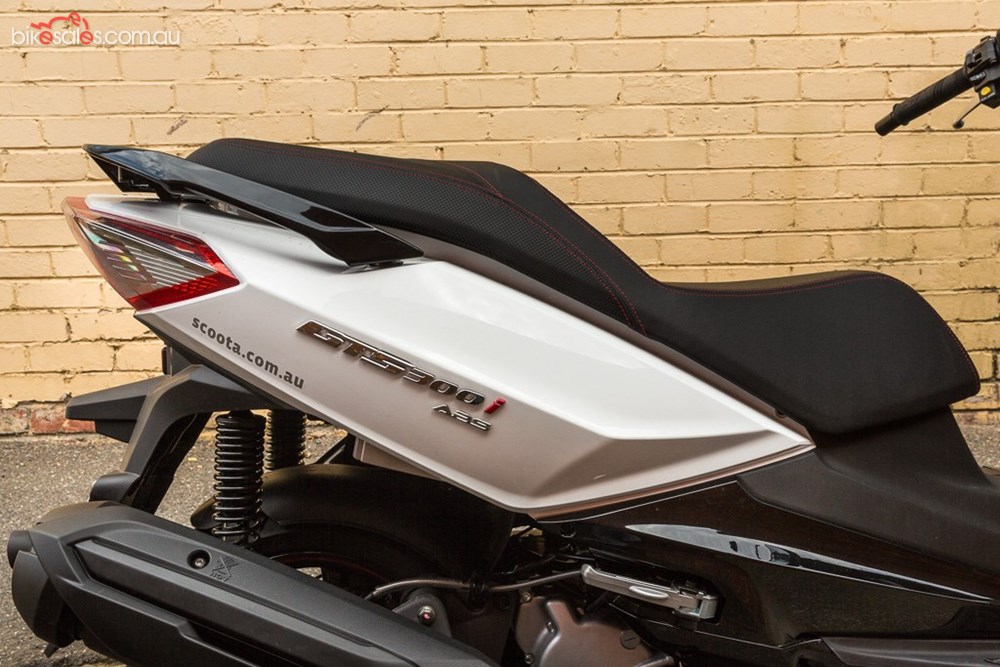 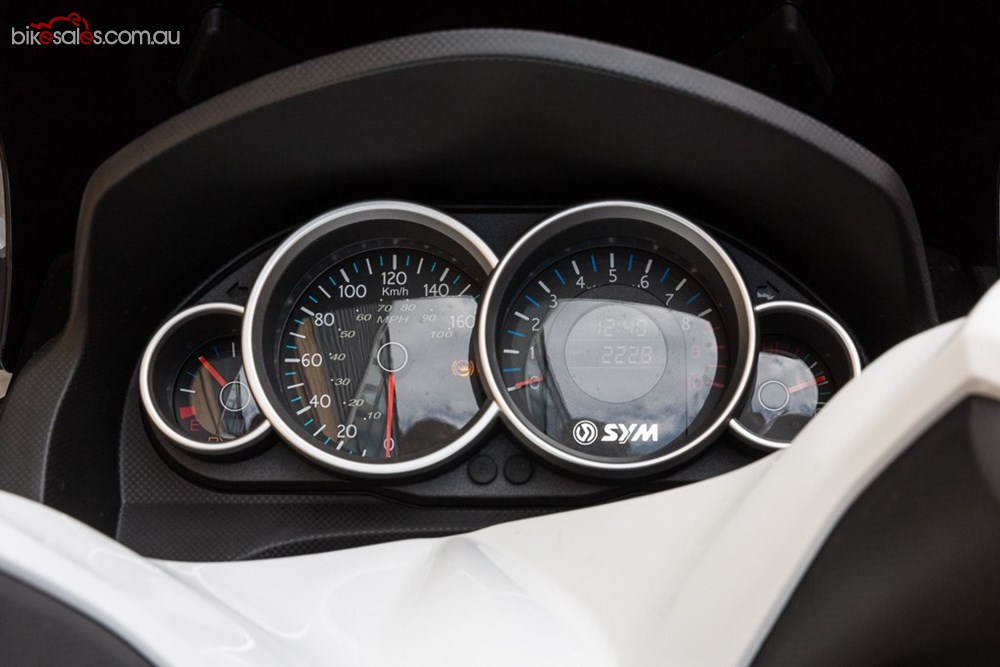 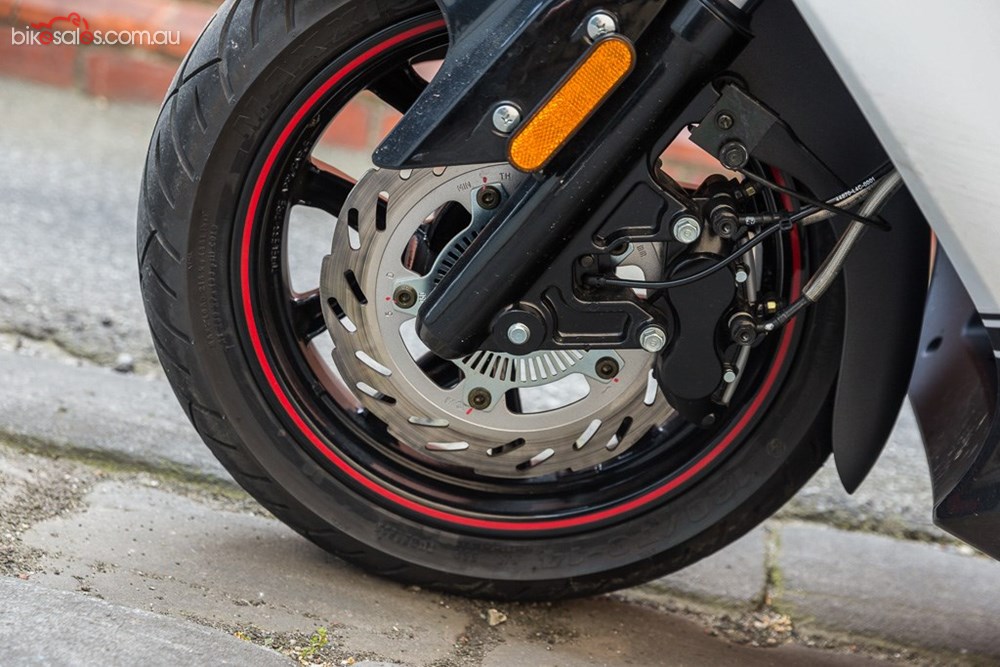