Quick, without Googling, what’s the best-selling motorized vehicle in human history? Model T? Nope – 15 million sounds like a lot, but the Volkswagen Beetle beat that with 21 million manufactured. And if you’re going by model name, whoever came up with the Toyota Corolla tower over both Henry Ford and Dr. Porsche with 35 million sold. Park those suckers bumper-to-bumper and you’d circle the Earth four times. And since I’m having so much fun with Google today, you could also say that long line of Corollas would stretch 1/3rd of the way to the moon. That’s a lot of cars.

“Ha!” says the Honda Super Cub in a tinny, high-pitched voice, “there are over 60 million of me!” Ol’ Soichiro Honda’s vision was to replace the noisy, dirty two-stroke motor that powered most small motorcycles with his clean, reliable, quiet four-strokers. The first Super Cub (the Cub was the clip-on bicycle motor that launched Honda Motors) of 1958 was a benchmark for cheap, reliable transportation. The frame was a tough, inexpensive pressed-steel monocoque design, with drum brakes and crude leading-link (and non-telescopic!) front fork. The motor was a four-ish horsepower 50cc four-stroke that could propel the bike to 50 mph with incredible durability and efficiency. Easy to ride and affordable in developing economies, by 1963 Honda was cranking out over 800,000 a year, and demand only increased; in the 2008 fiscal year Honda’s many factories spat out 4.7 million Super Cubs and related models.

Clearly, this scooter has some appeal. Yet, sadly, you can’t buy one from American Honda – the Passport, as it was called stateside, hasn’t been available since 1983. So the market was wide open for the Sym Symba 110.

The Symba is Taiwanese company SYM’s modern take on the classic Super Cub, although the technology hasn’t moved along that much in 50 years. It uses a pressed-steel monocoque chassis with plastic bodywork. Suspension is a telescopic fork and adjustable dual shocks. Brakes are drum – 130mm in front, 110mm in back. Wheels are spoked 17-inchers with inner tubes and Duro bias-ply tires. Amenities include an LED-light fuel gauge, passenger seat and pegs, and if you remove the passenger seat, you’ll find a small parcel rack…but since the bike is only rated at 199 pounds of carrying capacity, you should just leave the passenger seat for when you find a 40-pound passenger. The Symba weighs in at a claimed 209 pounds with its one-gallon tank topped off.

The powerplant is a 101.4cc air-cooled Single with overhead valves, fueled by a good ol’ fashioned carburetor, good for a claimed 6.5 hp at 8500 rpm. The four-speed gearbox works with an automatic centrifugal clutch to transmit power to an enclosed chain drive. Like a small piece of power equipment it’s not high-tech, but it should get the job done, right?

To find out, I took the bike out with me for an afternoon of riding around traffic-filled, pothole-ridden San Francisco. Could a small-displacement machine this simple meet the demands of an urban environment? After about 50 miles of riding around town, I think I can answer that.

The first obstacle you’ll have to cross is operating the Symba. It’s not like a modern scooter and learning to ride it takes some adjustment from your run-of-the-mill twist ‘n’ go. To start it, you hold in the brake pedal and lever and thumb the starter, or you can park it on its center stand and kick the folding kickstart lever. Either way, after a minute or two of warm-up, it’s ready to ride.

But where’s the clutch lever? There is none. Instead, you press down with your heel on the back of the heel-toe shifter (neutral is below, not above first) and roll on the throttle. First gear gets you going to about 12 mph, then it’s time to heel down to second. It’s easy to forget about the whole shifting thing and either lug the motor or over-rev it (careful – there’s no rev limiter!), which results in some herky-jerky riding your first day or two. You may as well leave your usual scooter gear at home and put on a clown suit, because you will look silly more than once.

But when you’re used to it, the Symba is a lot of fun. With a 48-inch wheelbase and big wheels, it’s both easy to maneuver and stable at higher speeds. The feathery mass is also great when it comes time to back into a parking space or pop it up on its stand. Acceleration is sufficient to maintain a presence and keep from getting run over in heavy traffic, and the pulling power is good enough to get a solo rider to the top of the steepest hill, no problem. I saw the easy-to-read speedometer reach into the 50s for brief stretches, but the bike is really not so happy cruising at high rpm – it gets buzzy and feels overworked.

Is it a motorcycle or a scooter? Well, it’s roughly the clinical definition of obesity away from being the same weight as a moped, so I’d compare it to one of our pedal-equipped friends first. Like a moped, it’s laughably easy to steer and seems to just sort of bounce over bumps and ruts like a beach cruiser. You also don’t feel guilty parking on the sidewalk or get worn out pushing it uphill. But unlike a moped, the brakes actually do something, at least until you’re bombing along near the bike’s top speed. Call it a moped, or scooter or maybe just a groovy lil’ motorbike, to quote the Beach Boys. I just call it a good time.

As far as practical goes, it’s hard to fault. Fuel economy is incredible, the best of any gas-burning vehicle I’ve tested. After 50 miles of city riding – and I didn’t baby it, although I should have – the tank wouldn’t take more than half a gallon, which means over 100 mpg. A lot of scooters claim 100 mpg, but the Symba actually delivers. And while the maintenance schedule is somewhat onerous – the book calls for an oil change every 600 miles and a valve-clearance check every 3600 miles, the bike is pretty simple to work on. It also has a luggage rack, a helmet lock and available accessories to help you carry even more. Anyone who’s been to China or Vietnam will tell you there isn’t much you can’t carry on a step-through. From chickens to building materials to an entire family, these simple, rugged vehicles are more pickup truck than recreational scooter.

You can even tour on one. Don’t laugh! That’s exactly what San Jose, California scooter enthusiast Binh Cheung did with his Symba (Check out Binh’s Blog). Last year he embarked on an epic three-week, 7800-mile journey on his little bike, loaded down with camping gear and spare parts. The goal was the Arctic circle, thousands of miles from San Jose. Cruising at around 50 mph on less-traveled two-lane roads, Binh tackled snowy mountain passes, hour after hour of cold rain and the bike-eating, gravel-surfaced Dalton Highway.

It wasn’t an easy trip. He had some scary moments, including fishtailing at 50 mph on a muddy road and being passed in the rain by huge long-haul semis on the desolate Dalton Highway.

After all, the Symba burned less than $400 in gas – about 100 mpg, “give or take,” wrote Binh. That left more money to spend on good food and better camping. He was cold and wet some of the time, but reports that he likes touring at a slower speed – he sees more and it’s more relaxing. He thinks touring in a car or on a big bike is boring – “the essence of motorcycling is a frame, a motor and yourself…I see the big bikes go by me and think, ‘why not just do it in a convertible?’”

He had some minor mechanical issues, understandably. His license plate cracked, some bolts vibrated loose, and an exhaust header nut sheared off. But he found he could go 1000 miles between oil changes with no problems, the spoked wheels stayed true the whole trip and he only used one spark plug, two and a half rear tires and just half of a front.

We’re in tough economic times these days, and we’re all looking for ways to simplify our lives – and gas won’t stay below $4 a gallon forever. Sym’s Symba may be a good way to save some dough, but it’s also fun, practical and very capable of all kinds of two-wheel motorized tasks. At $2398 it’s about as inexpensive as an over-50cc scooter can get. It’s also fun and charming enough to feel special, not just cheap transportation. It’s not for everyone, but it deserves a test ride. Sixty million riders can’t be wrong… 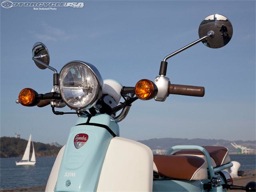 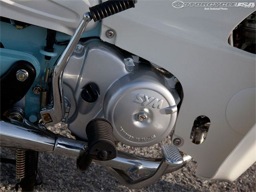 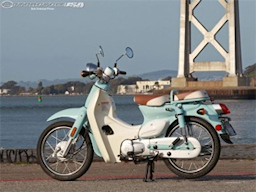